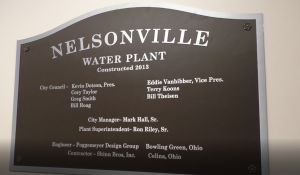 NELSONVILLE, Ohio (WOUB) —  Nelsonville residents’ struggle with disruptions in their water supply and boil orders because of frequent breaks in the city’s aging water pipes could be coming to an end.

Kevin Dotson, owner of Rocky, a restaurant and outdoor shop, has experienced complications from the city’s water supply first hand.

“There have been a lot of times here where a pipe has burst and we’ve had to have a boil order,” Dotson said. “There have been times where we haven’t been able to have the restaurant open because there is no water.”

The city has had five boil orders since March.

Things were compounded when one of the city’s two main water lines erupted.

“A couple years ago the primary line developed a leak in it and developed into a 30-foot water fountain in the middle of the river,” City Manager Scott Frank said.

This break left the already aging water system relying on a single main line for the entire city.

Frank said the city loses almost half of its water supply to leaky pipes in the system, contributing to an increase in cost and environmental damage.

But a new water main line, new pipes throughout the city, and quicker repair times are coming. The city plans a complete overhaul of its water system, thanks to a $5.4 million grant from the state through Gov. Mike DeWine’s H2Ohio project.

Frank said one of the main focuses is on nine major arteries under busy streets throughout the city.

“So those folks that live on those streets, ya know, their water service will become more reliable,” Frank said. “And then, as a whole, the boil orders will reduce and then the water loss will significantly decrease as well.”

The improvements will also loop in residents of Buchtel.

Buchtel currently has just one line going into the village with several breaks in it. Nelsonville-York High School is in Buchtel and has experienced a number of problems.

“Last school year alone, I believe we had seven instances where school either had to be canceled or dismissed early,” Frank said. “By replacing that line, the reliability to the school will significantly increase.”

The city also plans to add a second line to Buchtel, creating a loop to the village. Frank is hopeful this loop eliminates school closures completely.

Nelsonville was also able to purchase a hot valve to quickly and efficiently fix any leaks. The valve allows workers to temporarily cut off water flow to a section of pipe while it is being repaired.

“So we will be able to completely stop the water at the valve,” said Service Director Jason Cohen.

Without the valve, the city has had to wait for outside help to fix the line and Cohen said some leaks have nearly drained the city’s tanks because the section with the leak could not be isolated from the rest of the water lines.

He said that in one instance, a fire hydrant was hit causing a massive leak that took hours to fix.

“It was a pretty big leak, pretty disastrous,” Cohen said. “Luckily we found a valve, but if we had the machine at the time. Cause we waited hours upon hours trying to find a valve when we could’ve installed one.”

The city is waiting on a final pump to complete the hot valve and begin using it. Nelsonville hopes to break ground on the new lines as early as next August.