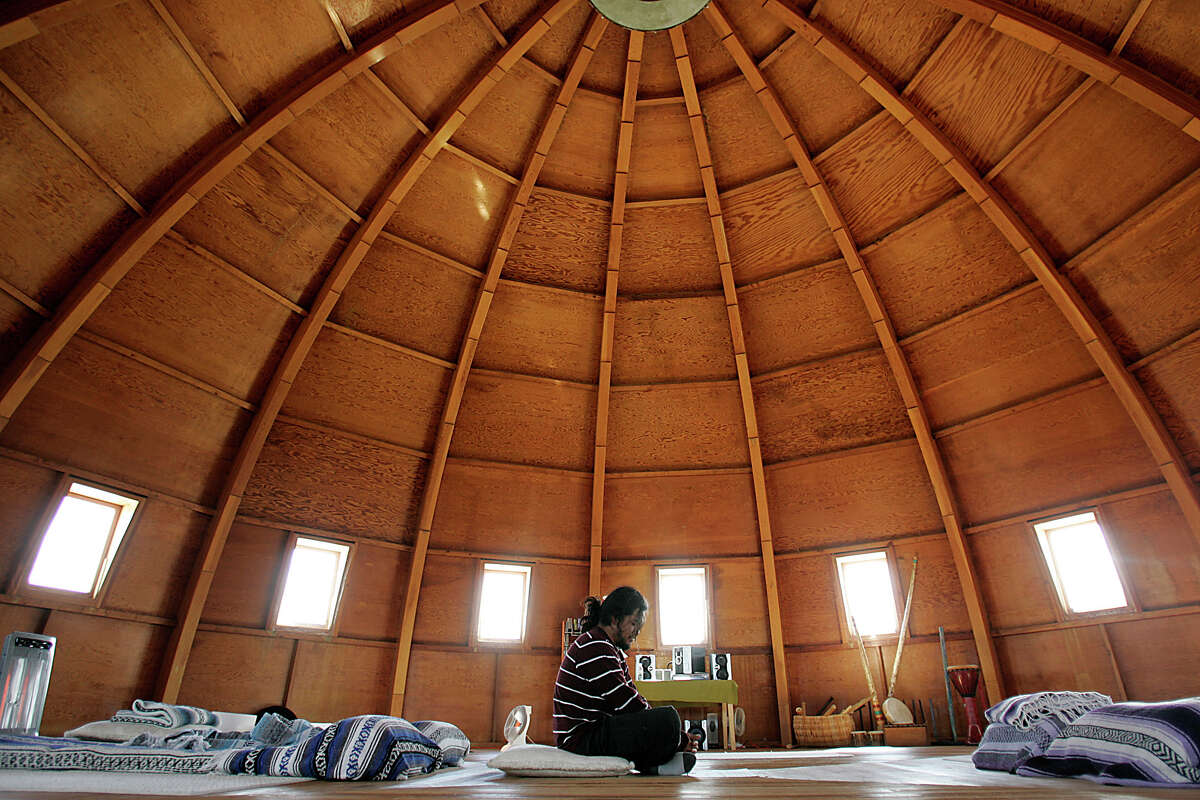 When someone tells you they’ve had an out-of-body experience, it can usually be attributed to one of two things. When I felt my spirit leave its shell, though, I was neither at church nor on acid. I was in the Mojave Desert, inexplicably weeping and questioning my life decisions inside an “electrostatic generator” called the Integratron, the magnum opus of an old man who thought he was an alien mouthpiece.

Allegedly based on “the design of Moses’ Tabernacle, the writings of Nikola Tesla and telepathic directions from extraterrestrials,” the Integratron looks like an alien spaceship, but without the tech. Inside the 38-foot-high white dome, it’s made of nothing but Douglas fir wood. Cushions and quartz crystal bowls are scattered throughout; light gently trickles in from a small, circular sunroof. While the current owners run it as a “sound chamber,” the original builder, George Van Tassel — author, aircraft engineer and “ufologist” — built the structure with the intention of generating electricity to “charge the human body” and extend human life.

“The biggest trouble on this planet is, that when you get smart enough to do something with the knowledge you have acquired here, death intervenes,” he once wrote.

While the Integratron failed as a fountain of youth, visitors from across the world still gather there to experience “psychoacoustics,” or sound-based healing sessions. The idea appealed to me immediately; as someone who uses synths to make ambient “drone” textures and other horrible noises, I’ve always believed that music is medicinal. (It may sound like New Age drivel, but there’s some science that backs up the theory.)

“The noise we hear in our everyday lives — media noise, traffic noise, etc. — can interact with our nervous system in the same way that stress does. The Integratron sound bath acts like an antidote to that chaotic noise in our minds, bodies and spirits,” Nancy Karl, who co-owns the Integratron with her two sisters, Joanne and Patricia Karl, told me when I visited. “Hearing those pure sounds in this unique space can truly be a transcendent experience.”

Parked in Landers, California, about 17 miles from Joshua Tree, the Integratron really does look like a UFO from a distance. But inside, it felt just like every other drum circle my parents dragged me to as a kid. I walked up a spiral staircase to the main sound chamber, where people in billowy linen pants shuffled around and sat on the floor without saying a word.

As the sound bath began and I let my conscious mind drift, I thought of my own mistreatment toward myself, along with the lack of boundaries I’ve imposed on others. When I awoke, I felt like a deep, suppressed part of my psyche had finally percolated to the surface; it reminded me of nothing so much as ego death, the “complete loss of subjective self-identity” that can happen while using psychedelics. I walked away feeling hollowed out, but lighter on my feet.

Enter the Mojave, an outcast’s oasis

Van Tassel’s life started off in a fairly conventional way, according to his 1952 book, “I Rode a Flying Saucer!” He was raised in a middle class family in Ohio before attending aviation school in 1927.

In 1930, he moved to Santa Monica to work in his uncle’s auto garage. That’s where he met Frank Critzer, a jobless eccentric with plans to unearth gold and silver in the desert, according to The Mojave Project, a multimedia documentary project by artist and writer Kim Stringfellow.

According to Van Tassel’s accounts, Critzer was on his way to the Morongo Basin when his car broke down; he was so down and out, Van Tassel fixed his car for free and let him sleep in the garage. When the car was ready, Van Tassel gave his new friend $30 in cash, plus provisions, which Critzer promised to pay back once he’d struck it rich.

The prospector then made his way to Giant Rock, an enormous boulder in the Mojave desert, and began using dynamite to blast a two-room subterranean home underneath, complete with a kitchen and a living room. The two men remained friends, and Van Tassel, his wife and their three daughters spent many weekends visiting Critzer’s “stone palace.”

Critzer’s underground home was featured in a number of articles during his life, but it was his death that would blast him into infamy. In 1942, Critzer became a suspect in a series of thefts in nearby Riverside County, which included 200 pounds of dynamite. When local police confronted him at his desert dwelling, he denied knowing anything about the stolen goods. An officer said he’d have to search the home anyway, to which Critzer pleasantly replied, “Come. I’ll show you.”

What happened once the officers descended into the cave is the subject of much debate. According to the cop who got farthest into the home, Critzer yelled, “You’re not taking me out of here alive. I’m going, but another way, and you’re going with me!” before detonating a crate of dynamite. Critzer’s body was blown to pieces in the blast, which burned the clothes off the officer’s back and landed him in the hospital. The other two escaped with concussions.

While Critzer was building his home, Van Tassel was building a career as a plane engineer. But he always yearned for the desert. In 1947, five years after Critzer died, Van Tassel turned the dream into a reality, moving his whole family to Giant Rock, where they lived in a truck near the boulder. George fixed up the defunct airstrip Critzer had built, and his wife Eva opened a little restaurant called the Come On Inn.

In 1953, Van Tassel began hosting group meditations in Critzer’s old home; it was during those sessions that he started channeling voices from his new “space brothers”: 700-year-old aliens who coincidentally looked like young “white people with a good healthy tan.” Over the next few years, Van Tassel reportedly developed strong relationships with several aliens, including an extraterrestrial named Ashtar. He claimed that his alien contacts taught him about a universal energy, which was so powerful that, if the masses found out about it, “there would be no more authority, no more money system and no more slavery by credit.”

Ashtar also brought dire warnings of looming nuclear destruction, which could only be subverted by Van Tassel spreading the good word.

Van Tassel called his new organization the College of Universal Wisdom; the family’s desert activities attracted attention from law enforcement, although investigators were unimpressed with what they found. According to a 1954 FBI report, the college was “nothing but a cave dug out beneath a giant rock,” where Van Tassel and his family lived in “primitive conditions.”

Those same aliens also brought him the plans for the Integratron, a 16-sided structure with a revolving ring around the outside, and a giant copper spiral around the building. The design was intended to generate electricity to “charge” the cells of people sitting inside while it ran. To fund the project, Van Tassel began throwing annual UFO meet-ups called the Giant Rock Interplanetary Spacecraft Conventions, which he hosted regularly until the mid-’70s. Attendees would camp at the site, discuss alien visitations and even experience their own.

In 1953, Van Tassel commissioned a Los Angeles architect to design the Integratron, and he set about building it. While the structure itself was done by 1959, according to the Mojave Project, the electrostatic generator was still unfinished when Van Tassel died in 1978. Several people leased the property from Van Tassel’s widow over the next few years, and then she sold it outright in 1987.

Before the Karl sisters bought it, they used to hop the fence and experiment with playing recordings inside the dome, according to the Desert Sun. When it was put up on the market in 2000, the three of them jumped at the opportunity to purchase it. Nancy Karl told me they plan to be stewards of the property for years to come.

Karl told me that the Integratron’s acoustics are powerful because of its curved shape and all-wood interior. Others have argued that it’s because the site is at a “geomagnetic vortex.”

“Magnetometers read a significant spike in the Earth’s magnetic field in the center of the Integratron,” according to the Desert Sun, and these magnetic forces, combined with the dome’s parabolic architecture, reportedly create “richer, fuller sounds.” My experience in the dome had indeed been so powerful I decided to look into the science of how sounds affect the brain. I found nearly 400 published scientific articles with evidence that sounds can change how we think and feel.

But I also happen to be particularly susceptible to spiritual experiences. My parents are classic Southern California New Agers; I grew up hearing about psychics, crystal healing and how my mother’s friend “astral projected” into her bedroom one warm summer evening.

My parents also weren’t afraid to welcome odd desert characters into our lives: When I was a teenager, they befriended Bob Carr, a boisterous, bearded and damn-near-toothless desert weirdo, while exploring the Sky Village Outdoor Marketplace, his ragtag flea market in Yucca Valley. We went back on Christmas vacations for years; I once even had to rescue them from his famous crystal cave, an art installation and meditation space filled with thousands of amethysts and quartz crystals.

I didn’t bring much mysticism with me when I left Southern California. But even now, the unknown still lures me back to the high desert’s lunar landscape. I once snapped a photo of a UFO over my parents’ house in the desert, and while I lost it when I lost the phone, I still think about it all the time. I can’t quite say why I’m so obsessed with that picture, or where I stand on the subject of “channeling” and interplanetary communication. If anything, my trip to the Integratron left me with more questions than answers. But there is one thing I know for sure: I want to believe.