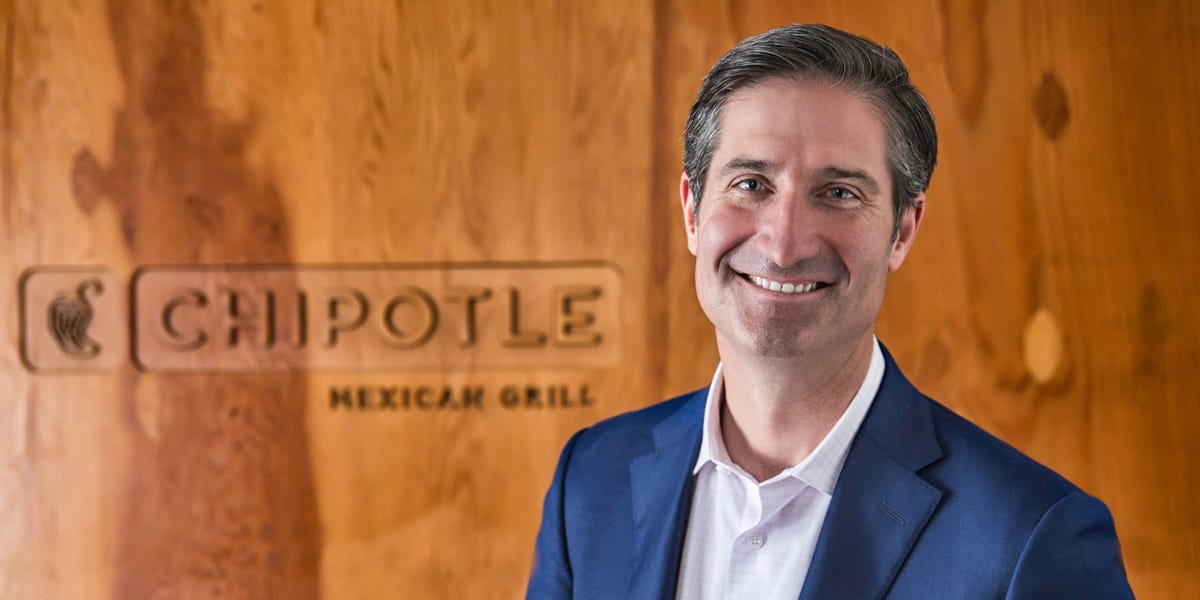 Chipotle burritos can be found in nearly every US state, parts of Canada, and even London; they’re also now available in the metaverse.

And while Brian Niccol, the company’s 48-year-old CEO, acknowledges he has little personal interest in a virtual tortilla wrap, he sees potential in the metaverse’s ability to reach customers in new ways.

“We’re trying to get people more connected to the Chipotle experience,” he said. “The more people understand it, the more they buy into what we’re trying to do and the type of food we’re giving them access to.”

And what type of food is that exactly? According to Niccol, it goes back to the company’s motto and mission of “food with integrity,” which means ethically raised meat, natural ingredients, and locally sourced produce.

Since taking the chain’s helm four years ago, Niccol has embraced that mantra. Under his leadership, the company has set ambitious sustainability goals, created composting programs in roughly one-third of its restaurants, introduced a plant-based chorizo, and increased its purchase of organic, local, and/or regeneratively grown and raised food year over year.

The company has also invested more in its employees by raising wages, improving internal promotion pathways, and expanding benefits, including a debt-free college-degree program for eligible US workers.

The company has prospered. Annual revenue is up 55% over the past four years to $7.5 billion. Same-store sales, which is a measure of sales growth at existing locations, are up 30% to $2.6 million during that time. And its share price has more than tripled.

It hasn’t all been smooth sailing. Chipotle, like many other fast-casual and fast-food chains, has recently grappled with supply-chain snarls, as well as labor shortages and worker strikes. In 2020, the company agreed to pay $25 million to resolve criminal charges that accused it of serving tainted food between 2015 to 2018 and sickening more than 1,100 people in the US.

Niccol, who has an MBA from the University of Chicago, started his career as a brand manager at Procter & Gamble working on Pringles potato chips. From there, he joined Yum Brands, where he held a number of executive roles, including general manager of Pizza Hut USA and CEO of Taco Bell. Niccol took over as CEO of Chipotle in 2018.

This interview has been condensed and edited for clarity.

What was it about the food industry as a profession that drew you?

In college, I did a brand-management internship at Procter & Gamble, where I worked on Scope mouthwash. And I got a job offer at P&G after college working on Pringles. That was really my first experience of running and marketing a food business. I realized that when you’re marketing a product like Scope or cold medicine or laundry detergent, it’s pretty clear that there’s a functional benefit. You get rid of bad breath or a cough or stains.

When I went to Pringles, I thought, “Geez, this is a chip.” There’s no direct benefit. The chip has to taste great, but the reason why you’re really loyal or excited is because you engage at this emotional place. There’s a richness to the decision-making that interests me.

Emotional eating is something many of us can relate to. What do you think is the driving emotion behind the purchase of, say, a chicken burrito bowl?

Almost a moral choice then?

We’re trying to communicate that we’re doing the right thing for food — the right thing for animals and for farming. We want to give our customers an understanding of why we choose to interact with farmers and partners differently and that we have principles for how you raise hogs, cattle, and chickens.

Is that a subtle dig at the other fast-food and fast-casual brands that maybe don’t have those same principles?

My experience is that you’re better served focusing on what you do versus focusing on what others don’t do. We’re one of the only ones that do these things, so hopefully, the supply chain will continue to move. People say to me, “It seems like everybody’s now saying antibiotic-free.” And I’m like, “Great.” We think it’s the right thing for food, and the more we can lead, the more we grow.

What’s a mistake you made earlier in your career and what did you learn from it?

One of the big barriers for Scope was portability. I found an old R&D project that was all about these little gelatin balls of Scope that you put in your mouth, and then the membrane dissolves, and you get a burst of mouthwash. I thought: “I’ve solved it! With a great name and great packaging, it’ll be a home run.” I blew past prior customer feedback that people didn’t actually like that bursting experience or the residue in their mouths.

I convinced my bosses to give me some money to keep researching it, and guess why the project went nowhere: The customer had told us what they didn’t like about it, and I ignored those attributes. There was a lesson for me: You have to listen.

How do you put that lesson into practice now?

I want to do everything I can to retain people because they feel excited about what they can develop into. So we asked our employees, “What parts of the job give you the biggest headache? Slicing onions? Chopping jalapeños? Coring avocados?” We figured if we could eliminate the things that got in the way, our people would be better on the front line, better on the grill, and better at the restaurant.

We just had an all-manager conference where we unveiled Chippy, a robot that fries chips, and we got a standing ovation. Restaurant managers know frying chips is one of the hardest jobs to get people to do. Everybody’s like, “Not it. Please don’t schedule me to do that.”

Is there a risk that employees see automation technologies like Chippy as a threat to their jobs one day?

It’s a balance. Our managers see Chippy as a way to make jobs more appealing, which gives them the ability to retain folks through development and growth. Hopefully, the person on the grill right now desires to become a service manager. If they don’t want to, they can stay a grill manager because we need those folks in our organization, too. I need a great grill manager to coach up another grill manager to go run another restaurant.

If we could figure out how to automate washing dishes, we’d get another standing ovation.

Chipotle was one of the first restaurant brands to set up shop in the metaverse. What’s your strategy?

It’s about creating an immersive experience. This is one of the things I had to learn. I asked Tressie, “Does building your own burrito digitally really get people to understand the experience of what it’s like to come into the restaurant?”

She said, “Yes. We have people washing lettuce, chopping jalapeños, mashing guac, and grilling chicken. We don’t have the smells yet, but I’m sure we’ll get there.”

That’s what we’re after — getting people more connected to the experience so they buy into what we’re trying to do and the type of food we’re giving them access to.

But research cited in The Wall Street Journal suggests that customer interest in virtual brand experiences is pretty low. According to Forrester Research, 43% of Americans indicate that they would actively avoid a brand-sponsored experience in an immersive digital platform.

I totally get that. Our job, though, is to be out in front. I’d rather be out in front and have to pivot than be a laggard and try to figure out how to catch up.

Do you personally have any interest in the metaverse?

Honestly? It’s limited. But I see the power in it. I have an 11-year-old. We did a Halloween burrito program — our first foray into the metaverse — and she couldn’t believe we were in Roblox. Her little friends were all going to Chipotle and getting Halloween costumes and so on. I see how we’re engaging in a way that I would’ve never imagined. How far is too far? I don’t know, but I would love to find out we went too far.

What are you doing attracting workers in this tight labor market?

The whole proposition has to be there: You have to have the right wage, the right ability to grow that wage, the right benefits, and the right access to those benefits. We provide a benefits around English as a second language courses that are tremendously valuable to new immigrants. We provide tuition reimbursement and debt-free degrees. People who take advantage of that have higher retention levels, and the likelihood of them becoming a manager or a field leader goes up seven X.

I think it also matters that we have a very simple purpose and point of view on food that people understand. It gives them a level of pride that maybe you don’t get in other places.

Again, a dig at other food chains that you think don’t have that pride of purpose?

You see a lot of places trying to come up with them, and they just don’t seem genuine. That’s where this stuff falls apart for folks. I say this all the time, “I don’t want to hear corporate-ese or advertising-ese. We’re a company of a 100,000 people. Let’s talk human to each other.” We care a lot about food — the way it’s grown and the way it’s cooked. And we care a lot about people and the impact they can have in their communities. The more we stay centered on those simple ideas, the more people understand what our company is about.

Chipotle pledged to cut carbon emissions in half in its restaurants and the supply chain. How do you get there?

We’re working on everything from how we build our restaurants differently to the transportation and warehousing. We’re spending time on our waste, our packaging, and the entire food supply chain.

About 15 years ago, we stuck a windmill on the roof of one of our restaurants in Indiana to see if we could generate enough wind energy to run the restaurant. We found out we couldn’t, but I share that as an example of how we’re going to experiment. There’s not just one thing. It’s going to take a little bit of a lot of things.

Chipotle recently debuted vegan chorizo. Are you on a mission to make people eat healthier?

Healthy is such a loaded word. I don’t think you just need to eat green beans. You can eat healthier by eating cleaner foods and food that is raised correctly. It’s healthier for you and for the planet. Frankly, I think the biggest barrier for why people don’t eat healthier or more consistently in a way that’s better for animals, themselves, and their communities, is that the convenience isn’t there.

And that’s where Steve Ells had a simple idea: “Great food can be done fast.” Our definition of great food is: food with integrity. And that channels all the way through the supply chain.

Speaking of the supply chain, how is Chipotle managing through the product bottlenecks and the inflationary pressures weighing down the economy?

It could have been a lot easier for us to walk away from “food with integrity,” given the supply-chain challenges and the inflationary environment we’re dealing with, but we’re not going to. The number of times people have said to me, “Well, there is this path where it would potentially make the supply chain have more options.” But that’s not the path our company is going to take.

When you get into these tough situations is when you find out whether or not you’re going to stay true to your values. I think people are going to hold companies to that going forward.