MILAN, Tenn. — Food Truck Fridays are in full swing at the Milan City Park this summer. 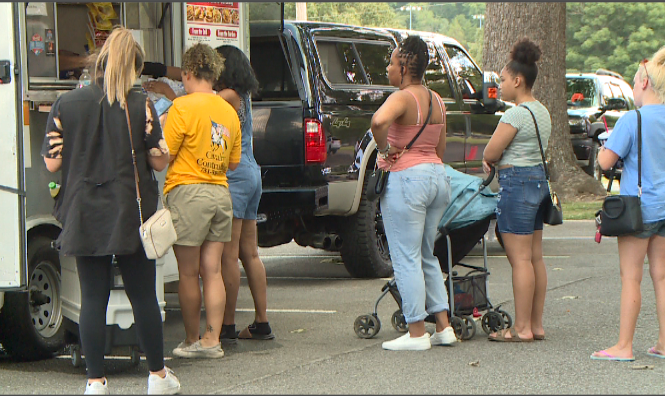 Food truck vendors showcase their cooking skills during the event for the community.

“Just try to keep a good variety of offerings where anybody can come here and find something that they like,” said Dale Nelson, whose son runs Woah Nelly’s Snack Shack.

From sweet to savory, Food Truck Fridays allows everyone to satisfy their cravings.

“The turnouts have started being fantastic here lately, a whole lot better than what it was when we first started going,” Nelson said.

The pandemic brought a lot of doubt to what would happen in the future, but that didn’t stop Nelson from supporting his son’s goal to open a food truck.

“It made it a struggle at first. Everywhere was really protective about food trailers and cross-contamination with that, even though there really wasn’t an issue with that,” Nelson said. “There was just a lot of unknowns getting started, so everybody was a lot more reserved than what they are now.”

As the restrictions start lifting, Nelson says now is the time to start your own business.

“Starting a business right now would be the absolute best time, just because of the sheer volume of people that are getting out and doing stuff,” Nelson said.

The last day to enjoy Food Truck Fridays will be July 30.

This website uses cookies to improve your experience while you navigate through the website. Out of these cookies, the cookies that are categorized as necessary are stored on your browser as they are essential for the working of basic functionalities of the website. We also use third-party cookies that help us analyze and understand how you use this website. These cookies will be stored in your browser only with your consent. You also have the option to opt-out of these cookies. But opting out of some of these cookies may have an effect on your browsing experience.
Necessary Always Enabled
Necessary cookies are absolutely essential for the website to function properly. This category only includes cookies that ensures basic functionalities and security features of the website. These cookies do not store any personal information.
Non-necessary
Any cookies that may not be particularly necessary for the website to function and is used specifically to collect user personal data via analytics, ads, other embedded contents are termed as non-necessary cookies. It is mandatory to procure user consent prior to running these cookies on your website.
SAVE & ACCEPT