The symphonic smells of pungent fish sauce, tangy curries and sizzling meat waft through the hot, thick air as families shelter in the shade of an ornate temple, plates of steaming noodles and banana leaf-wrapped sweet rice in hand.

It could be a scene from a bustling street market in Thailand on a stifling summer’s day, but it’s Dallas on a Sunday afternoon. After shutting down for nearly a year during the pandemic, the Buddhist Center of Dallas has resumed its Sunday food stalls.

For 15 years, every Sunday the Buddhist temple off of Forest Lane in North Dallas has converted its parking lot into a Thai street food destination where temple members, some of whom are retired restaurant industry professionals and others skilled home cooks, set up cash-only booths with makeshift kitchens and cook up regional Thai dishes to sell, which helps raise money for the temple.

“The food that they cook at the temple is uniquely and authentically Thai,” says Dr. Ken Theppote, vice president of the Buddhist Center of Dallas. “They make things that you can’t find at local Thai restaurants.”

The papaya salad, for example, sticks to the true flavors used in Thailand, not the sweet stuff you find in restaurants that cater to American tastebuds, Theppote says. And you can find curry puff and sakoo the way they’re made by street vendors in Thailand. 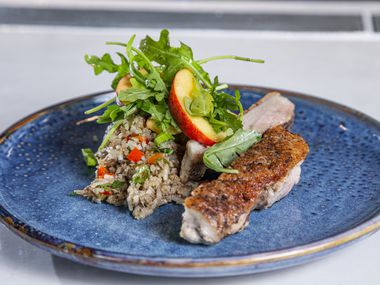 Depending on the day and time, ordering from the temple’s food stalls can require a bit of patience as the food stands, even the temple’s permanent one called Im Boon, are small volunteer-run operations staffed by families and children.

The temple relies on word of mouth to bring customers to the food stalls, and since reopening in early June 2021, traffic has picked up significantly as people desperate for travel seek out cultural experiences and community. On a recent Sunday, despite the suffocating heat, several stalls sold out hours early while others were backed up with orders.

At one stand, a one-man show gracefully whipped up made-to-order plates of chicken pad Thai, curry wraps and fragrant fried rice fresh out of a sizzling wok, pausing infrequently to catch his breath and wipe his brow. At another, students of the temple’s school sold bottles of water, Thai tea and popsicles until their stash ran out. 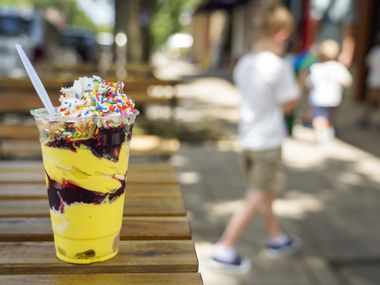 Over the years, the temple has had offers to commercialize and streamline the street food stalls, Theppote says, but they like it the way it is — authentic and humble.

“As Thais, we love to share our culture and our heritage,” says Nikky Phinyawatana, chef and owner of Asian Mint and a member of the Buddhist temple.

Phinyawatana doesn’t cook at the Sunday food stalls but instead takes more of a promotional role and shares the dishes of the day with social media followers through live streams. She says she loves seeing new faces at the temple, and it’s becoming more and more common.

“I love how it has grown organically through word of mouth,” she says. “People are looking for more authentic experiences, and this is it. Coming here helps curb my need to travel to Asia. It really feels like Thailand, especially during the summer. You get the sweat.”

Visitors can escape some of the heat and sit at shaded tables throughout the grounds or in the gardens that are maintained by the temple’s monks. To avoid missing out on popular dishes, Phinyawatana recommends getting to the temple before noon.